The master planner, Skidmore, Owings & Merrill from U.S.A has planned and defined the development concepts for the entire 2.600 ha. There are total 21 functional areas around Nguyen Van Linh Parkway, five of which are developed by PMH Corp., as follows:

· The New City Center will be the heart of the entire urban development project. It is located at the major turn of Nguyen Van Linh Parkway and close to Tan Thuan Export Processing Zone and just about a 10-minute drive from the current downtown of Dist. 1 & 5. The New City Center encompasses 409 hectares of land, including 110 hectares reserved for community amenities including parks, schools, civic uses and support facilities. The New City Center will contain trade centers, offices, hotels, shopping malls, entertainment complexes, healthcare facilities, housing and tourist-oriented uses, all within walking distance to each other.

· The New City Center is organized into eight districts and a large river park. The development concepts are inspired from famous places like Singapore Bay, Canal District in the U.S.A, and the central business district in Hong Kong … Each district has its distinct character and identity that is attractive to tourists and enjoyable for its residents. They are: 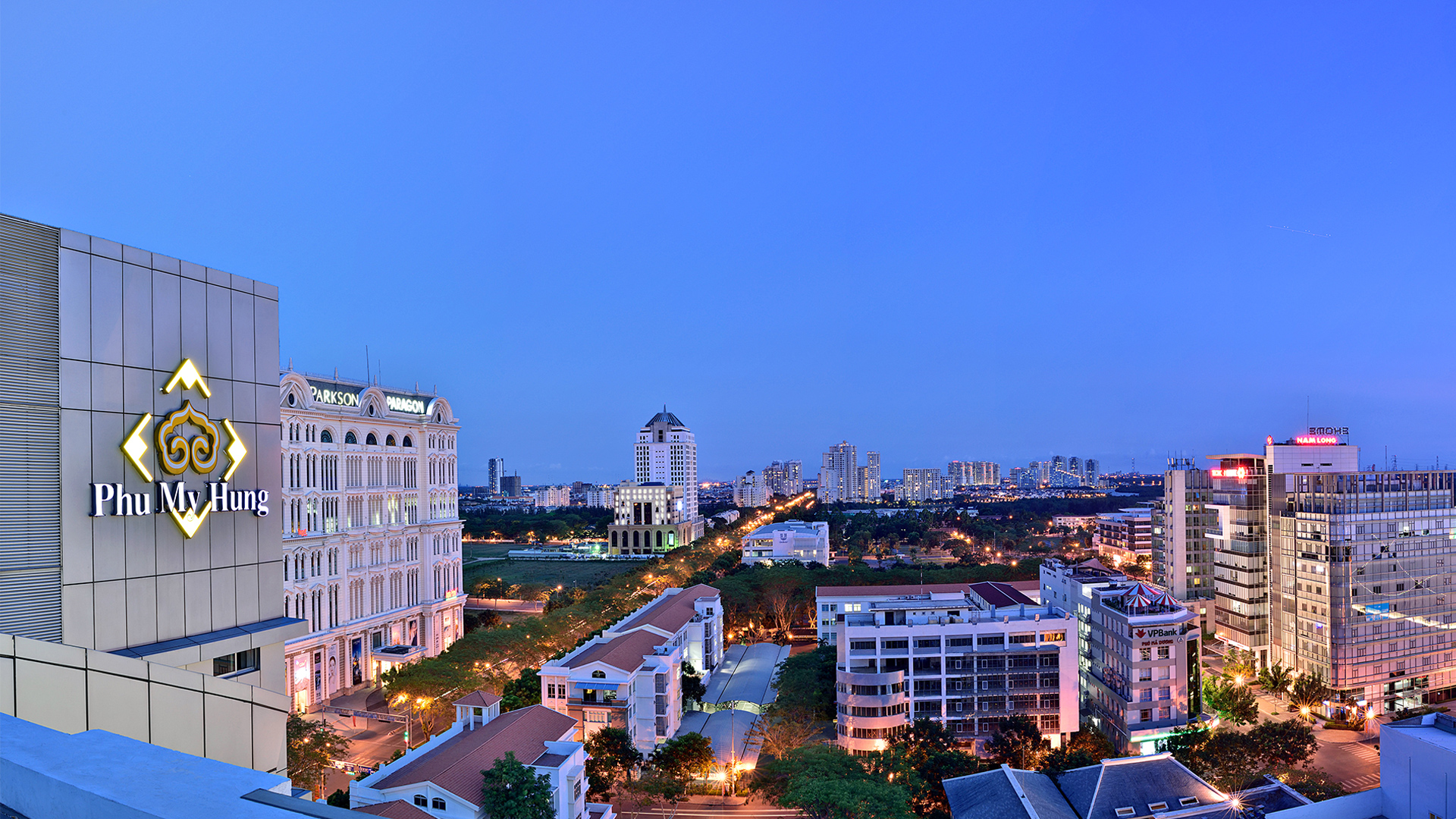 The International Commercial & Financial Districtis the heart of the entire New City Center. It consists of an international exhibition & convention center, office buildings, services, hotels, civic buildings, malls, and entertainment complexes etc. Being a place for economic growth and employment, this world-scale complex is attracting many investors, businesses to set up their headquarters, showrooms or expand their business such as Manulife, Unilever, BMW, Porsche, Khaisilk, Vinamilk, Hoa Binh, Fuji Film… and sub-branches of many famous banks like Vietcombank, MHB, Agribank, Techcombank, ACB. Especially, the completion of Saigon Exhibition & Convention Center and Saigon Paragon mixed-used building by the end of 2008 will create a new identity for the New City Center and meet the needs of entertainment, shopping and business of local and international entrepreneurs.

In addition to commercial projects, there are also residential developments in C district of Phu My Hung New City Center. Star Hill high-end apartment project, which is under preparation, will be the first of this kind in this hub.

The concept of the Crescent Promenade District is inspired from the Singapore Bay to create “a social heart” for the community in the Phu My Hung New City Center and existing HoChiMinh City. The series of modern 7F~30F mixed-used buildings along the Crescent lake edge on several land lots CR1, CR2, CR3, CR4, CR5, CR8 will become a memorable landmark for the locals to enjoy, and tourists to admire.

· For most people, HoChiMinh City is short of “a social heart” where people can come for gatherings and relaxation at the weekend. The Crescent Promenade District is the destination to meet this increasing need.

· The design team of the Crescent Promenade District:

· The groundbreaking ceremony of the 1st phase Crescent Project was celebrated on March 26th, 2008. This is the first of its kind in Vietnam in terms of large-scale commercial complex for lifestyle and leisure at riverfront. This project is sited at the heart of PMH New City Center. The 1st phase development will comprise of four 7-storey buildings. Three of them are serviced apartment buildings consisting of 267 units and the other one is for office uses. The modern design of the serviced apartments with a little tropical touch will satisfy expatriates’ demand towards home-like accommodation. The entire third floor of the office tower will be a health club including squash facility and children playground for Crescent tenants, which is reachable through the pedestrian friendly skywalks linking up the buildings on 3F.

· The ground floor and second floor of each building are retail spaces totaling 22,000sqm for different trades and Al Fresco style F&B stores. Adjacent to the river, a 900 meter long Crescent Promenade will be created for a comfortable walk for leisure and a gathering place for fun on weekends. Simply an enjoyable lifestyle is foreseen here!

· The construction of the Crescent is expected to be completed by early 2010. Meanwhile, Phu My Hung Corp. will continue developing high quality residential projects and upgrading the living environment in Phu My Hung New City Center. Moreover, several commercial projects will also be completed by different investors. Hence, the new urban city where provides comprehensive functions that qualify a modern and civilized city will be presenting a new appearance in the near future. 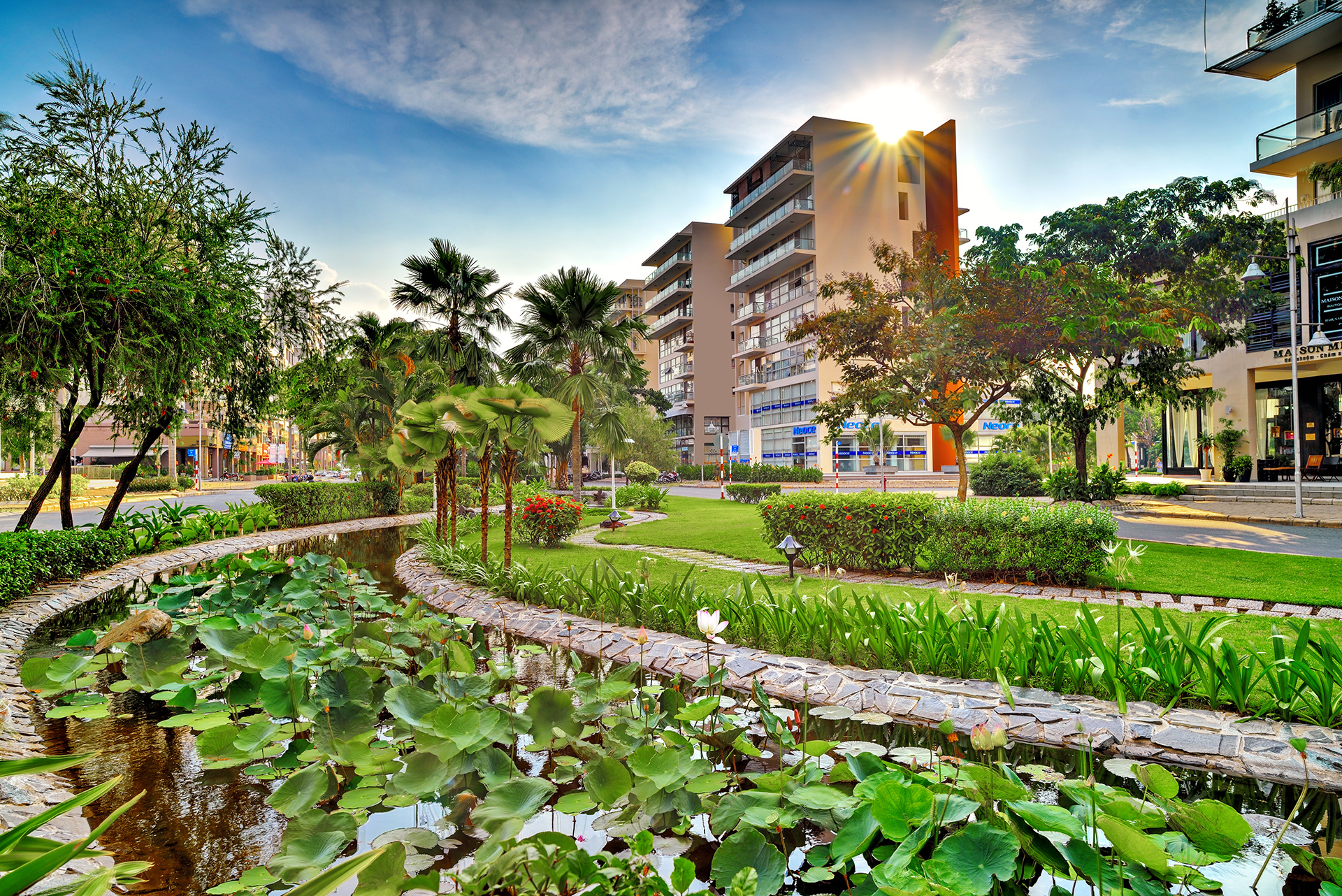 he Canal District is a dense commercial area organized along the men-made canal. The design concept has been inspired from the Canal District in the USA with the shaded walkways, shops and services on the ground and second floors of all apartment buildings along 40m wide Ton Dat Tien avenue.

A well-landscaped meandering park in the middle of 40m wide Ton Dat Tien Avenue is like a large garden in front of apartment buildings. It is destined for a social gathering place with the canal, park benches and a variation of flowers, plants.

There is a walking bridge connecting the Canal District to the 900m Crescent promenade. 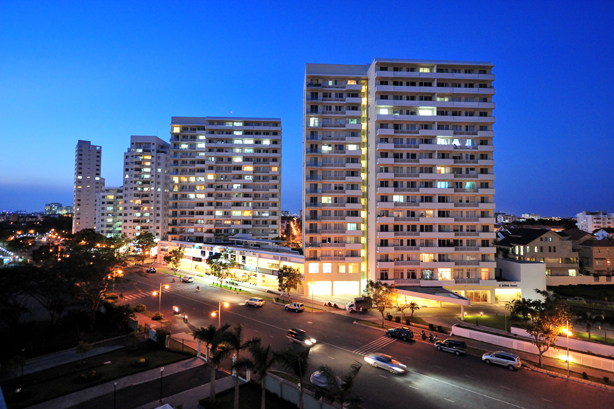 Hill View District is a residential area focused on the central Nguyen Duc Canh and Ha Huy Tap Street. There are also some commercial facilities along ground floor shops of buildings and some street-front townhouses.

There is a nursery school, a kindergarten, a supermarket and the Customer Service Center in Hillview District, making it convenient for residents’ daily life and activities. 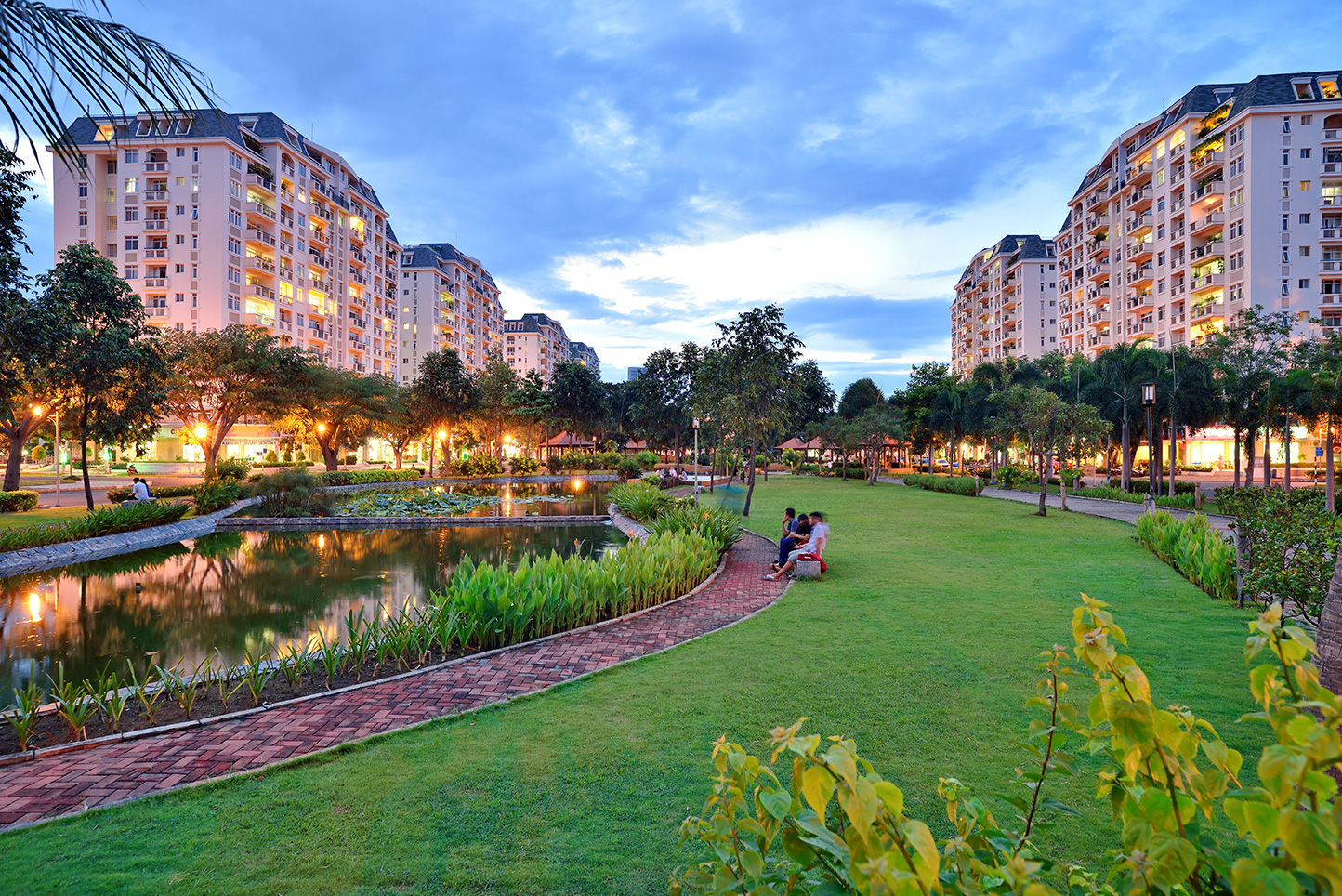 The Southside District is a residential area organized around parks and neighborhood centers. Located next to the International Commercial & Financial District in Phu My Hung New City Center, Southside District offers an inviting living space with the convenience of nearby services and the advantage of ecologic environment

There are several schools in the area such as The Japanese, Korean, and Taipei schools. The Saigon South semi-public School is just nearby. In the near future, more kindergartens, primary and high schools will be built here.

The Midtown Business District is an area along a canal south of the International Commercial & Financial District. It is a mixed-used area for the development residential and commercial projects.

The Medical Campus contains a number of medical facilities in a park-like campus setting. There are currently FV hospital (220 beds), Tam Duc Cardiology hospital (180 beds) in operation. Hoan My clinic is under construction and some other mixed-use developments.

In addition, Phu My Hung Corp. has also constructed and put into use a sport complex, including Saigon South Driving Range, a 9-hole golf course, a swimming pool with sandy bottom and four tennis courts. 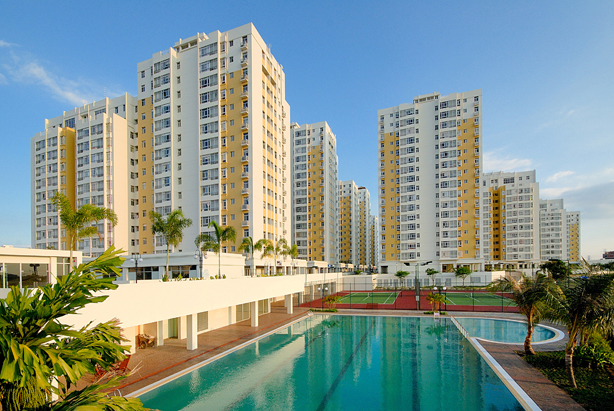 The Recreational and Cultural District (R District) is a residential neighborhood surrounded by cultural and recreational belt in the North, Nguyen Van Linh Parkway in the South and the scenic riverway in the East.

The residential projects in this district are townhouses, apartment buildings; especially Sky Garden with over 3,100 apartments in 3 stages, which has created opportunities for many homebuyers with installment program.

The University Place is centered on the intersection of Nguyen Van Linh Parkway and the improved Chanh Hung street. It encompasses 95 hectares, of which 18 hectares are in community uses including schools, parks, civic uses, and support facilities. This neighborhood takes its name and identity from the Universities that are close by. It will be a mixed-use neighborhood with a high concentration of residential, local commercial, and community uses.

The High-Tech Center is the third urban complex developed by Phu My Hung Corp. It is located at the intersection of Nguyen Van Linh Parkway and Communal Road 5, encompasses 46 hectares (including 3 hectares for community uses) at the center of a larger community that locates next to a Science-based Industrial Park

The High-Tech Center is surrounded by a mixed-use neighborhood, providing a complete setting for living and working of residents, scientists and expatriates. It will be an appealing location for returning expatriates bringing technologically advanced business enterprises.

The projected population within the High-Tech Center is approximately 15,000 people, at an average gross population density of 320 people per hectare.

The programmed site area for Merchandise Center Two encompasses 85 hectares, of which 5 hectares are in community uses including schools, parks, civic uses, and support facilities.

The projected population within Merchandise Center Two is approximately 11,000 people, at an average gross population density of 130 people per hectare.

MerchandiseCenter One encompasses the land area defined by National Highway 1, the Ben Luc River, the Can Giuoc River, and Nguyen Van Linh Parkway. This area is highly accessible from all regional location, both, by roads and waterways.

Merchandise Center One covers 115 hectares of land area at the intersection of National Highway I and Nguyen Van Linh Roadway. It contains a mix of wholesale distribution areas, warehousing, industrial uses, highway related commercial uses, housing, hotel, a transportation and vehicular transfer station, and other port related uses. There are also 14 hectares of land reserved for community amenities including parks, schools, and support services.

The planned first phase of Merchandise Center One contains a mix of land uses, including highway commercial, wholesale and distribution, hotel, residential complexes, community amenities and a first phase local port at the Ben Luc River.

10 reasons to buy a house in Phu My Hung